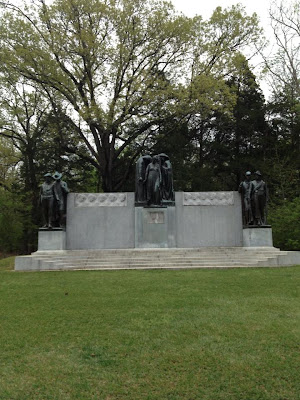 "Erected to the memory of the Confederate soldiers by their friends", dedicated November 1, 1871. Camden Point cemetery, Platte County, Missouri.

In July of 1864, Col. John Calhoun Thornton began recruiting men for Confederate service in Platte County. Eventhough the puppet Union government of Missouri forced the enlistment of its citizens into the "Enrolled Missouri Militia" (E.M.M.), approximately 1,500 E.M.M. members rallied to the Confederate cause. These pro-Southern E.M.M. were sometimes known as the "Paw Paw Militia". According to one Federal report, "There never were more than 200 true Union men in this county" and "the Southern sympathizers all call themselves conservative Union men now, and are very active in withholding the facts and misleading the authorities." Union General Clinton B. Fisk on July 12, 1864 reporting to Maj. Gen. Rosecrans, declared, "the Paw Paw militia in Platte County, with scarcely an exception, went over to Thornton in a body, and the great mass of the citizens have thrown off the mask and declared openly for Jeff. Davis and the Southern Confederacy. An abundance of Confederate uniforms was found to be in waiting at Platte City, and the Paw Paws with alacrity exchanged their blue jackets for gray ones. Major Clark reports the uprising among the people as general...General, be not deceived, Missouri is as rebellious to-day as ever, and the earlier the national authorities act upon this conclusion the better. It will require more than 5,000 reliable U.S. troops to hold my district from a general uprising; every hour I spend among the people confirms me in this opinion."

While an account by Confederate Col. Thornton is not known to survive, it is believed his intentions were to liberate Platte and adjacent counties from Federal occupation and perhaps hold the area long enough until Gen. Sterling Price could arrive with reinforcements from Arkansas. With a three to four hundred men detachment, Col. Thornton "attacked and captured Platte City and its garrison of militia." Union General Clinton B. Frisk reported, "The Confederate flag has been waving over Platte City for two days, protected by men who for many months have worn our uniforms and carried under the stars and stripes the guns they now turn against us." In response, Federal forces were not idle. On July 13, 1864, detachments of the 2nd Colorado Cavalry (under Col. J.H. Ford) and the 15th Kansas (under Col. Charles Jennison), sometimes known as "the worst body of cut-throats and freebooters that ever tortured a victim or looted a community", made a surprise attack on approximately 200-300 of Col. Thornton's Confederates at Camden Point. Union Assistant Adjutant-General, G. A. Holloway reported, "Our combined forces had a fight with the rascals last night at Camden Point, burned the town and mustered out a few devils, but the rest were routed.." Col. J. H. Ford (2nd Colorado Cavalry) reported, "we ran on to the enemy at this place, killing 15 of them. Our loss, 1 killed and 1 badly wounded", "killed no citizens, although many of them need killing" as well as "capturing and destroying a large number of muskets, shotguns, cartridges, accouterments and also ten kegs of powder."

Eventhough the Federals reported killing 15 of Thornton's men, the Confederate memorial at Camden Point only lists six Confederates who died at the skirmish. The names of these six are: Robert McCormack; Jasper Clements; Almarine Hardin; Richard Alvis; Andrew Smith; and Jesse Myles. These men were first buried on the battlefield, then later moved to the Camden Point Cemetery nearby. Aside from the human casualities, the loss in arms and especially gunpowder was a devastating loss to Col. Thornton's command. Although Thornton's forces again clashed with federals on July 17th near Fredericksburg (Ray County, Missouri), most of his forces dispersed, and the general uprising abandoned, being replaced with guerrilla tactical warfare.

Soldiers and Sailors of the Confederacy

"The Soldiers and Sailors of the Confederacy" monument is located on South Confederate Avenue south of Gettysburg. It was dedicated on August 25th, 1965 and is the creation of Donald De Lue, sculptor (who is also responsible for the Mississippi and Louisiana monuments at Gettysburg); William Henry Deacy, architect; and Art V. Lera Fond, founder. The sculpture rests atop a circular stone base inscribed with the names of Confederate and the border states: South Carolina, Florida, Georgia, Texas, Arkansas, North Carolina, Kentucky, Mississippi, Alabama, Louisiana, Virginia, Tennessee, Missouri, Maryland.

The Confederate soldier is raising a flag in his left hand, while urging his fellow comrades forward with his right hand. Included on the monument is the name "Walter Washington Williams." Born on November 14, 1842, it was thought that he was the last member of the armed forces of the CSA when he died on December 19, 1959 at the age of 117. Walter was a member of a Texas regiment and served under General Hood.

The following are the inscriptions:

A memorial to soldiers and sailors of the Confederacy."

"Heroic defenders of their country. Their fame shall be an echo and a light unto eternity."

"Walter Washington Williams, who was recognized by the government of the United States as the last surviving Confederate veteran, died 1959 at the age of 117 years." 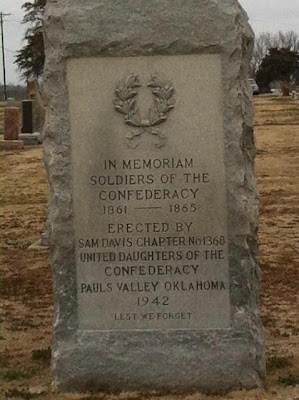 Found this by accident while traveling in Oklahoma.
Lisa Oxley 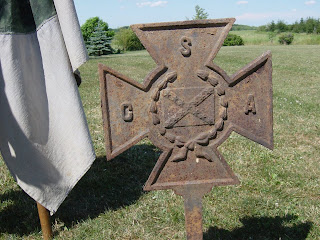 It was not to long ago that I received a call from an old school mate regarding an item that he bought as a scrap metal piece for his business. My friend was a dealer in scarp metal and this particular item caught his eye in the separation process. It was a cast iron object that had on it imprinted or forged a Confederate flag. This person had no idea what it was, but knowing that his old friend Chester was a Civil War Historian and Living Historian he called me and asked if I could look at it, and possibly identify it. So I got in my old pick up and drove to the scrap yard. Upon arriving he took me to the office and showed me the item.

To my disbelief I was looking at a cast iron marker depicting the Southern Cross of Honor which I knew at the time came from the gravesite of a Confederate Veteran.

I explained to him what it was and where it came from. Being an honorable person himself and after finding out what it actually was. He entrusted me under my insistence to return it to its proper place and handed it over to my procession.

Therefore. Through Capt. John Zakrzewski and myself. It is now on its way back home in the South where it will be placed upon the grounds where heroes rest in Southern soil.

I wish to Thank Mr. John Ritter and Mr. Gary Johnson for contacting me about this item. And could there have also been Divine intervention? I would say yes.

So. It is on its way back below the Mason Dixon Line.
We will follow it all the way till it is in its proper place of Honor.
For it is our duty as members of the Sons of Confederate Veterans, and Americans. 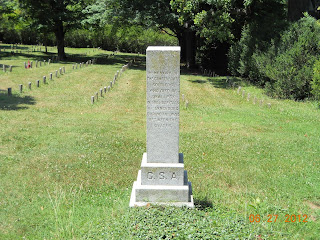 10 May is our Confederate Memorial Day Randolph Williams

Confederate monument over the mass grave of soldiers 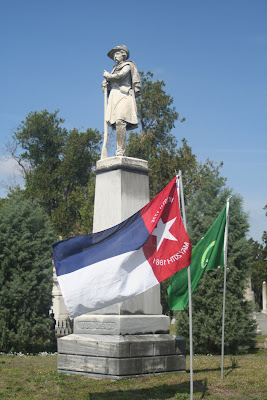 Memorial service at Cedar Groove Cemetery, New Bern, NC on 17/3/2012
this is a monument over the mass grave of soldiers killed in the Battles around New Bern, NC

Cedar Grove Cemetery, one of the oldest in North Carolina, is located in downtown New Bern. The monument was dedicated to the Confederate soldiers killed in the Battle of New Bern. Beneath the monument about twelve feet down in a crypt lies the remains of the soldiers.

On May 2d, 1867, was laid the corner-stone of the mausoleum or vault beneath centre plat. It was completed at a cost of about $2,000. Herein have been deposited sixty-seven bodies of Confederates, who died or were killed in or near the city during the war. Their names are preserved by the Society. Three other interments have been made since; and any Confederate soldier, remaining true to the “Lost Cause,” may be buried here, if his family so desire.

Above this mausoleum, on the summit of the mound, stands the Association's crowning work—the beautiful monument reproduced in the frontispiece. It rises from a bottom base, four feet square, to a total height of eighteen feet. The bottom and subbase, die and shaft, are of fine Rutland blue marble. The life-size statue on top was cut, after a design expressly for this monument, by the best workman in Carrara, Italy. It represents a Confederate soldier in uniform and overcoat, on picket, with every sense awake as he keenly watches for the slightest hostile movement. Calm, faithful, brave, he will never be surprised. A noble face and figure, a typical hero from the ranks! In procuring and setting in place this statue, Mr. J. K. Willis, the skilled marble worker of New Bern, kindly assisted the ladies without charge for his personal care and superintendence.

Just as this statue was put in position, the first and only president of the Association, Mrs. Daves, passed from her service here to her reward. Her last moments were cheered by the announcement of the happy completion of this work, so dear to her noble heart.

The monument was finished in time for the annual May celebration, 1885. So Monday, May 11th, a most charming and auspicious day, was appropriated to the

NOTICE:
No Anonymous comments posted.
Be man enough to stand as one.


Support
The Efforts of Southern American
Could use help paying
for highspeed Internet service.
Cost around $50 a month. Or Mail to:
PoP Aaron
PO Box 90095
East Ridge TN.
37412